Mitie’s 250th electric vehicle has been deployed on its fleet, supporting its commitment to switch 20% of its small van and car fleet to electric by the end of 2020. 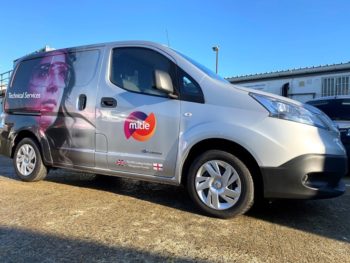 The milestone vehicle – a Nissan e-NV200 van – is on the roads at Heathrow, playing an important part of the airport’s goal to establish an airside ultra-low emissions zone by 2025 and to become a zero-carbon airport.

The van joins the 200 electric cars and 49 electric vans already part of the Mitie fleet – 17 of which are based at the airport – less than three months after it marked its 100th EV and started to roll out electric vans among its operations.

Mitie also has 400 more vehicles already on order and set for delivery in the first quarter of 2020, putting it well on track to meet its 20% by 2020 commitment, as well as its pledge to switch its full fleet of 5,300 vehicles to electric by 2030, under the EV100 initiative.

However, although new data released today shows the UK is one of the leading European countries for charge point infrastructure, Mitie has said that a lack of both charge points – including on-street residential and rapid chargers – and larger vans remain “major blockers” for the UK’s EV transition.

Simon King, director of sustainability and EV strategy, Mitie, said: “As this important milestone shows, our electric vehicle commitment is picking up pace as we rapidly roll out electric vehicles all over Britain, putting 75 new EVs on the roads every month. However, if the UK is going to meet crucial targets to reduce carbon and minimise the effects of climate change, we need more businesses, as well as government departments and city councils, to join us in the switch to electric vehicles. The first step to achieving this is ensuring an adequate number of charge points, in the places where they are needed most, are installed all over the UK, so that drivers are sure they can charge where and when they need to.”