Inadequate on-site charging remains a major barrier to deploying electric commercial vehicles, according to a study of more than 200 operators by UPS and Greenbiz, which was carried out earlier this summer. 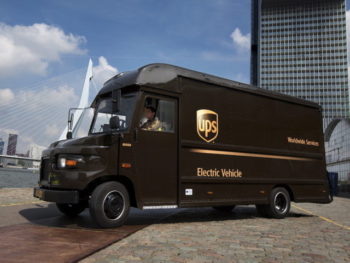 UPS said collaborations with manufacturers and governments had helped it to deploy more electric vans.

The results show fleets are open-minded about rolling out plug-ins. Only 24% of respondents said management was a barrier, while 83% reported that they were interested because electric commercials tied into sustainability or environmental goals.

However, despite showing an appetite, 44% said on-site charging infrastructure was a barrier, while almost all respondents (92%) reported that their facilities were poorly equipped for charging commercial vehicles.

The report shows widespread collaboration between operators and manufacturers, with 70% saying they were feeding information back for future product development. However, 32% claim inadequate product availability is a barrier to wider adoption – 41% of small, and 35% of large organisations listed this as the top reason for not switching.

Meanwhile, over half (55%) said purchase price was their biggest barrier, which is reflected by cost benefits not being the most popular reason for deploying electric commercial vehicles. Two thirds said lower total cost of ownership was the main reason for using the technology.

As a result, the survey suggests companies are taking a cautious approach; typically leasing vehicles as suitable candidates are replaced, rather than opting for widespread adoption. UPS pointed out that less than half of respondents are working with government bodies to help shape policy in favour of electrification. The logistics company said its collaborations with manufacturers, government and utilities had all been helpful when adding new vehicles to its fleet.

Scott Phillippi, UPS senior director of automotive maintenance and engineering, said: “The challenges of cost and infrastructure requirements can be daunting, but we’ve begun to see solutions emerge. In the U.S., we recently ordered 50 electric-powered delivery trucks that we anticipate will be at cost parity with conventional diesel-powered vehicles. And in London, we were able to find a solution for our charging needs through a collaboration between government and private organizations.

“The business case, combined with growing preference for EVs from cities and national governments, will help us to reach a tipping point to large-scale EV fleet adoption.”

The UPS and Greenbiz report is available here: Curve Ahead: The Future of Fleet Electrification