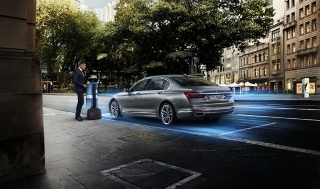 Set to follow plug-in hybrid versions of the X5 and the refreshed 3 Series, the 740e uses expertise drawn from the BMW i3 and i8, offering fuel economy of up to 134.5mpg and CO emissions of 49g/km, based on the test cycle for plug-in hybrids.

The drivetrain is a combination of 2.0-litre four-cylinder turbocharged petrol engine and 95bhp electric motor, which share an eight-speed automatic transmission. Combined output is 322bhp, which enables the car to reach 62mph in 5.5 seconds from rest.

A lithium-ion battery is housed under the rear bench, providing enough energy to travel up to 25 miles using just the electric motor, at speeds of up to 75mph. Drivers can conserve this electric range for urban sections of the route using the car’s selectable driving modes.

As well as the 740e, BMW will offer a long-wheelbase 740Le xDrive version with four-wheel drive. This slightly reduces the electric range to 23 miles, while fuel economy drops to 122.8mpg with CO2 emissions of 53g/km. Both versions should be eligible for the Plug-in Car Grant.

Aside from the drivetrain, the new 7 Series makes use of the carbon fibre reinforced plastic (CFRP) structure seen on the i3 and i8, claimed to reduce the weight by up to 130kg compared to its predecessor.

It also features new technology including a gesture-controlled contact-free infotainment system, remote control parking which can drive into tight spaces with nobody at the wheel, and wireless charging for mobile phones.

UK sales begin in October, shortly after its public debut at the Frankfurt Motor Show, with prices starting at £64,530 on the road. Pricing and on-sale dates for the 740e and 740Le xDrive have not been announced yet.