Nissan has launched a range-extended electric drivetrain in the Note compact MPV; the first time it has offered its EV technology with a petrol backup.[/vc_column_text] 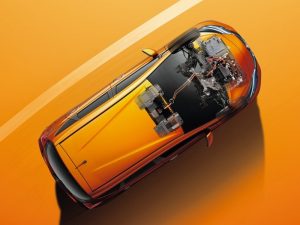 Nissan has yet to confirm whether the Note will get the system in Europe.

The e-POWER system was previewed in the Gripz SUV concept at Geneva this year, suggesting the technology could also be utilised in the next Juke.

It’s a similar technology to the Vauxhall Ampera and BMW i3 REX; the wheels are always driven by the electric motor, in turn supplied by a battery pack, but there’s a three-cylinder petrol engine used as a generator when the charge reaches a set level.

Nissan said its system is unique because, unlike most range-extended vehicles, it requires only a compact battery pack and motor, which enables it to fit into the Note’s engine bay.

The company has yet to confirm whether the Note will get the system in Europe.

“At its core, we believe in zero emissions,” Nissan Europe’s director of electric vehicles, Gareth Dunsmore told EV Fleet World recently. “Our Intelligent Mobility strategy has a power element, and that needs, at the base technology level, a battery and an electric powertrain.

“However you then merge and treat that, it starts with that technology. Whether that’s adding a fuel cell, or a range extender series hybrid option to it, we’ll see where demand goes and respond to that.”