Polestar has revealed its Polestar 2 five-door fastback, which launches next year to bring a rival to the Tesla Model 3. 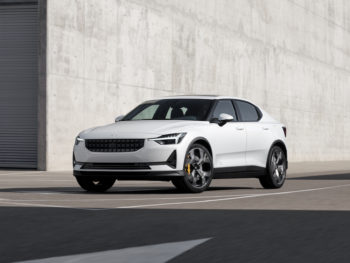 Marked out as the Volvo offshoot’s second production car and its first fully electric car and volume model, the Polestar 2 is built on Volvo’s Compact Modular Architecture platform (CMA), which debuted on the XC40, and features two electric motors to give all-wheel drive plus a 78kWh battery, which will be integrated into the floor and available to charge through a connected digital solution, in-car and on mobile devices.

The brand says it will offer a targeted WLTP range of 500km (311 miles) while the 408hp drivetrain will deliver 660Nm, giving a 0-100kph time of less than five seconds.

On-board tech will include an Android-based infotainment system – including the Google Assistant, Google Maps with support for electric vehicles and the Google Play Store and featuring voice control and a 11-inch touchscreen display. There’ll also be Phone-as-Key technology to enable car sharing as well as Polestar’s connected services such as pick-up and delivery.

Production of Polestar 2 begins in early 2020 in China for global markets in both left and right-hand drive.

Initial launch markets include China, the United States, Canada, Belgium, Germany, the Netherlands, Norway, Sweden and the UK. Other markets are under consideration for future expansion.