Tesla is switching to an online-only global sales model, ahead of the launch of the $35,000 entry-level Model 3. 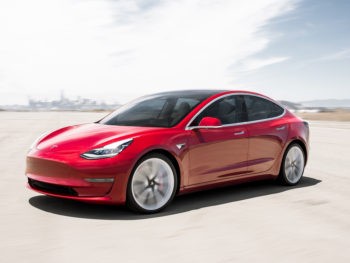 Announced via its blog, the ‘standard’ Model 3 has been open for deposits since the car was revealed in March 2016 and is vital as Tesla looks to bring electric mobility to the masses. It offers 220 miles of range, a top speed of 130mph and 0-60mph acceleration of 5.6 seconds – the cheapest version had previously offered a 264-mile range, and was priced at $44,000.

Tesla is also introducing a Model 3 Standard Range Plus, which is priced at $37k and brings increased range of 240 miles compared to the basic model while top speed rises to 140mph and the 0-60mph time falls to 5.3 seconds. It also features more premium interior features.

Prices for the new models outside the US have not been announced but Tesla CEO Elon Musk said in a tweet that “Country-specific taxes & import duties mean price may be 25% or more above US number.” This would put the standard model around €38k / £33k while the Standard Plus model would be priced around €41k / £35k.

The arrival is being facilitated by shifting all sales online, which will also enable the brand to drop all vehicle prices by around 6% on average. Over the coming months, Tesla will close many of its stores, with some in higher-demand locations remaining to showcase products and provide information.

The company highlighted that it would be quicker to buy this way and added that test drives weren’t required due to its refund policy that enables customers to return a car within seven days or 1,000 miles for a full refund.

However, it’s not known how it will impact the UK, and more specifically fleet sales. A spokesperson for the UK said: “It’s too early to speculate on how the changes will affect things locally.”

It follows production issues with the Model 3 and redundancy announcements last summer as well as in January, when Tesla said it would reduce its full-time employee headcount by approximately 7% to help facilitate the launch of the $35k Model 3.

Tesla is also implementing a number of firmware upgrades for both new and existing customers that increase the range of the long-range rear-wheel drive Model 3 to 325 miles, ramp up the top speed of Model 3 Performance to 162mph, and add an average of approximately 5% peak power to all Model 3 vehicles.

Both Model 3 Standard and Standard Plus are available to order today in the US with deliveries due to begin in the second half of 2019 while, as per the latest tweet, order books in Europe are expected to open in six months and in Asia in six to eight months, dependent on Tesla’s new Shanghai Gigafactory, which it’s started construction of and is expected to open in 2020. No order date has been announced for the base model for the UK, with the spokesperson saying it’s not yet been configured for left-hand drive.