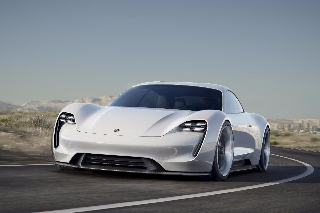 Greenlighted by the supervisory board, this will be a production version of the Mission E concept from the Frankfurt Motor Show earlier this year, but it’s unclear as yet whether the four-door, four-seat car will be a derivative of the next Panamera or its forthcoming compact sibling, or whether it will be a standalone model.

Preparing for production, the carmaker will invest €700m (£503m) in its facilities, creating more than 1,000 new jobs, including expanding the engine factory in Stuttgart-Zuffenhausen for electric motor production and adding a new paint shop and assembly plant on site. Some of this investment will also be used at the Weissach development centre.

The concept suggests the production car will produce over 600bhp, reaching 62mph in 3.5 seconds from rest, and offer a range of over 300 miles on a single charge – figures which will enable Porsche to rival the Tesla Model S P85D. Porsche’s ‘Turbocharger’ charging system is said to be able to restore 80% of the battery charge in 15 minutes, and wireless charging capability will be available too.

Dr. Wolfgang Porsche, Chairman of the Supervisory Board of Porsche AG, said: "With Mission E, we are making a clear statement about the future of the brand. Even in a greatly changing motoring world, Porsche will maintain its front-row position with this fascinating sports car."

Chairman of the Porsche Executive Board, Dr. Oliver Blume, added: "We are resolutely taking on the challenge of electric mobility. Even with solely battery-powered sports cars, Porsche is remaining true to its philosophy and offering our customers the sportiest and technologically most sophisticated model in this market segment."