Lance Bradley, managing director of Mitsubishi Motors UK, on the changing role of diesels for a 4WD-heavy manufacturer, and government support for the EV sector. 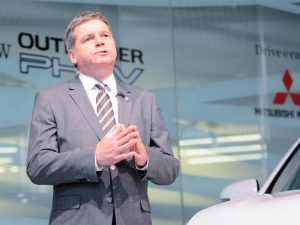 2016 was good – from a profitability point of view we’ve had a good year. Our volume was back a little bit almost entirely due to the change in the Plug-in-Car Grant. It effectively put the [Outlander PHEV] price up £2,500 but it also took it above the list price for Motability.

The EV market is still a fledgling market. We’ve always said to OLEV we don’t expect the [grant] to last forever, but it’s expensive technology and we need time to get the volume up so the cost per unit comes down. We said if you’re going to change it, change it gradually or you’ll shock the market, but various pressures meant that’s what they did.

How much had VED changes impacted the market?

There doesn’t seem to be a joined-up government policy. EVs count for 3% of the market, it would have been easy to make [VED] £10 per year and add a pound to everyone else. But it came across as something which hadn’t been given the thought it should have, and the signal is the government is backing off EVs. I don’t think that’s true, but most don’t get to talk to OLEV or the people who are committed to it.

Do you see a role for PHEV in the Eclipse Cross?

It’s to be confirmed, but we’ve spent a lot of time and effort in becoming a market leader in the UK with PHEV technology. I would expect to build on the success that we’ve had.

With Outlander sales weighted towards the PHEV, how long does diesel have a role in your range?

There’s a lot of talk about diesel, and some if it is a bit sensationalist from newspapers who don’t understand a modern diesel is quite a lot better than a diesel of ten years ago. But you can see, over the last couple of years, that the diesel share of the market is declining, so we’re looking at whether we need to bring in a petrol Outlander. We’ve spoken to dealers in the last couple of weeks, and that’s likely to happen. We’ve already got petrol in ASX, and Eclipse Cross will be launched with petrol – it’s becoming a bigger part of our range.

It’s very strong, they’re coming back off contract hire companies at a price where dealers will be selling for less than £20k. We’re putting in a PCP programme where they’ll be £179 or £199 per month, and the margins were enough to pique their interest. Our dealers understand the technology more than anyone else as they’ve sold more than anyone else. We’ll be doing a campaign and encouraging them to buy from contract hire companies and Motability later in the year.