A new electric car sharing service will go live in Paris in March 2020, offering 24/7 access to a fleet of 500 Renault Zoe electric vehicles. 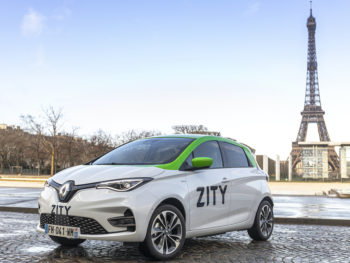 The cars will be available on a free-floating basis across the city and accessed via a mobile app, with different rates on offer to meet needs, including per minute, fixed time or time credit with ‘economy packs’.

The Zity service is being launched by Renault in partnership with multinational Ferrovial and follows their 2017 debut of the scheme in Madrid. It’s expected to prove popular in the French capital – where 20% of inhabitants use car sharing, according to government figures – and could be rolled out to other cities in Europe in coming years.

“The Zity electric car-sharing service in free-floating offer has many advantages, including flexible booking times and the availability of vehicles, in the right place at the right time, thanks to a high-performance application,” said Gilles Normand, SVP, electric vehicles & mobility services, Groupe Renault. “With a cleaner, accessible and sustainable mobility offer, Zity also provides a response to the needs of cities to reduce CO2 emissions and to combat pollution.”

Zity joins existing car sharing schemes in Paris, including Ubeeqo and the Car2go service operated under Daimler and BMW Group’s joint Share Now division, while Volkswagen will launch expand its WeShare electric car sharing scheme to the city this year as part of its ongoing roll-out in Europe.

But the launch of the schemes come at a time when services in other cities are being scrapped due to poor take-up; BMW’s DriveNow – also part of the Share Now brand – will shut down its operation in London by 29 February 2020, as announced late last year while Share Now is also pulling out of the United States and Canada. London’s Bluecity car sharing service – operated by French infrastructure giant Bolloré that also ran the former Autolib car sharing service in Paris – also closed this month.

The five-seater Zoes on the new Zity scheme are equipped with a reversing camera and parking sensors, GPS, touch-screen infotainment system and cruise control, and bring guaranteed battery levels. Vehicles requiring charging are removed from use by the Zity teams and recharged. The scheme will also use algorithms to analyse vehicle use and reposition vehicles where needed after servicing to ensure they’re in areas of high car sharing demand.

The next steps in the development of the partnership between Groupe Renault and Ferrovial are subject to authorisation from the European Commission in the area of merger control.