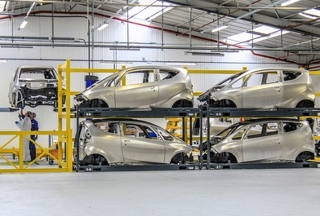 Signed last September, the agreement sees Groupe Bolloré transfer over production of the model, previously only made in Italy, with plans for Renault to also make a possible three-seater version for the Bolloré Group’s car sharing schemes and to participate in a JV on car sharing under a new deal between the firms. In addition, Renault Twizys have now been added to the Bluecub all-electric car-share fleet covering the Bordeaux area and the Bluely fleet in Lyon as part of the agreement.

Renault is producing the Bluecar at its Dieppe plant in northern France using parts brought in by Bolloré. The model will be produced alongside the Clio Renaultsport 200 EDC and competition vehicles. A dedicated assembly shop has been set up within the plant to handle the work on Bluecar, and will eventually employ 30 people.