By Alex Grant / 6 years ago / New Cars, Road Tests / No Comments
After several years of clever but often unusual-looking plug-ins, 2015 could be the year of the understated ultra-low emission vehicle. Cars which, like the Audi A3 e-tron, give few visual clues to the technology underneath and don’t require a step change in day-to-day usage, yet still offer attractive running costs for company car drivers. 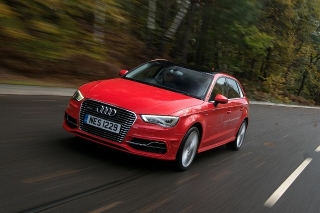 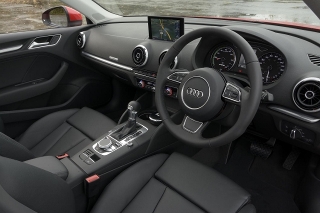 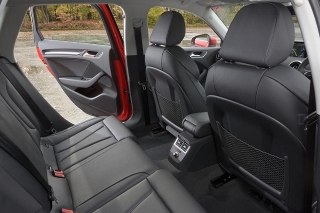 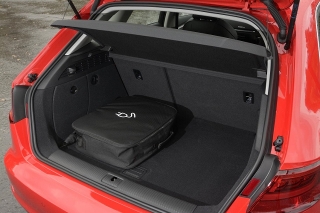 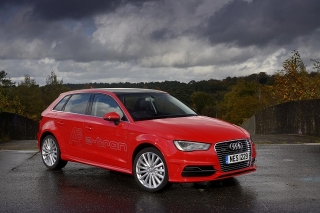 For user-choosers, the A3 has all the makings of a best-of-all-worlds company car. Beautifully well-designed inside and solidly built with it, this is already a familiar fleet car and only subtle badging gives away what’s happening underneath. Namely a 1.4-litre turbocharged petrol engine, paired with a relatively powerful 101bhp electric motor which can power the car for up to 31 miles without using any fuel.

In theory, though this adds 200kg to the kerb weight compared to the nearest equivalent diesel, that makes the e-tron a respectable warm hatchback, and it’s cleverly packaged too. The battery is under the rear bench, and the fuel tank repositioned under the boot floor. It means luggage capacity is unchanged and there’s no loss of head or legroom for rear-seat passengers, but there’s no space under the boot floor to store the charging cables.

Unclip the grille badge and swing it sideways, and there’s charging port behind one of its rings. The A3 doesn’t feature rapid charging, unlike the Outlander PHEV, which means a full charge takes two hours. That’s not a dealbreaker for a car with a petrol engine as a backup, but it stops drivers from gaining any useful range back when stopping en route.

With that said, the remaining hybrid system is a clever one. Even with the electric range depleted, the A3 can roll along with the petrol engine deactivated at motorway speeds, and gentle driving can allow significant sections of a long trip to be covered without using any fuel.

While a diesel engine is likely to be more fuel-efficient for drivers who spend every day covering long distances, with fuel economy settling between 45 and 50mpg and only the quiet hum of a petrol engine it’s not unfeasible to take this further without blunting long-term average figures too much.

Within the MMI system are additional menus to select between driving modes. These enable fully electric driving on demand, which won’t sporadically engage the petrol engine on steep inclines and heavy throttling, and three options for the hybrid system. Fully automatic is the best way to extract high economy for long trips, but it’s also possible to store battery power or charge it using the petrol engine for journeys which end on urban roads.

Plus the A3 has a second talent. It can combine both power sources, producing a potent 202bhp with the kick-down switch fully depressed. Performance is blunted slightly by the weight, but it’ll serve up strong acceleration helped by the torque of the electric motor, ideal for overtaking or getting up to motorway speeds.

The only part which can trip up is the transmission. Where the Japanese manufacturers have favoured continuously variable transmissions in their hybrids, Audi has used a six-speed dual-clutch gearbox. While this means it doesn’t moan under heavy loads, it’s not as smooth around town, tending to shudder slightly through its ratios when slowing for traffic lights in electric mode.

There’s also a noticeable kick when the battery runs flat and the engine fires up for the first time, particularly at high speeds. However, it’s seamless in its switch between electric and petrol power once it’s functioning as a hybrid. Like the rest of the car, it’s no more challenging than any other automatic Audi A3, which should give it plenty of corporate appeal.

Low Benefit in Kind liability and the design, badge and performance appeal of high-powered A3 should make this a popular option for company car drivers. But it’s a shame real-world fuel economy couldn’t be boosted with short top-ups on a rapid charger.