By Martyn Collins / 4 months ago / Road Tests / No Comments

Martyn Collins finds there’s not much Mustang in Ford’s first EV – but it’s still a great drive with affordable BiK and impressive range. 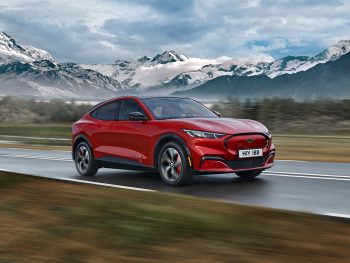 Think Mustang, think iconic American muscle car – right? Well, not in the case of the new Mach-E, as Ford has chosen to use the iconic galloping horse logo and image for its first all-electric model.

Many styling cues are borrowed from the current Coupé and Convertible range, although the Mustang Mach-E does have two extra doors. The push-button solenoid doors, which can be operated by mobile phone, are another talking point. The Mach-E is attractive and has a lot of presence on the road, though our Standard Range RWD test car, with its tall suspension and 18-inch wheels – which looked a bit lost in the arches – shouted SUV more than sports car.

No less surprising is the Mustang’s interior, the standout feature being the large 15.5-inch central touchscreen. There’s another smaller, slimmer screen in front of the driver displaying speed and range information, while the large infotainment screen is running Ford’s new Sync 4 operating system – it’s simple to operate and the maps are easy to read. The rest of the interior is attractive and well finished – although some of the plastics aren’t a match for European rivals.

Still, the seats and driving position are comfortable. Despite the curvy roofline, there’s plenty of headroom front and back in the Mach-E and rear legroom is good too, as is the practically-shaped 402-litre boot. All are well-equipped, with features including a mobile phone wireless charging pad. With the full set of airbags, and Intelligent Adaptive Cruise Control fitted as standard, Ford’s first EV feels safe too.

The Mustang Mach-E is available in 98.7kWh Extended Range or 75.7kWh Standard Range versions, with rear- or four-wheel drive. Standard Range versions combine a 68kWh (useable) battery and motor set up, resulting in 265hp with 0-62mph in 6.1 seconds and a 273-mile range. Choose the all-wheel drive (AWD) version, and it has the same power, but accelerates quicker, this time just 5.6 seconds 0-62mph, although the range drops slightly to 248 miles.
The Extended Range version has the bigger 88kWh (useable) battery, meaning power jumps to 290hp, with 0-62mph acceleration in 7.0 seconds and 379 miles on a charge. The all-wheel drive version of the Extended Range version is the range-topper with 346bhp, and 0-62mph in 5.8 seconds, and a still-impressive 335-mile range.
Fast Charging up to 150kW is possible, with 0-80% charge for Standard Versions in 38 minutes, while Extended Versions take 45 minutes.
Our Standard Range rear-drive Mach-E, had over 260hp providing performance that is more than ample for everyday use, while the only slight disappointment is the Mach-E’s somewhat unsettled ride. This is probably the result of this car’s bulk, which at over two tonnes is not exactly lightweight.

Three driving modes: Whisper, Active and Untamed change the character of the Mustang’s drive further. Whisper is the most relaxed way to enjoy the car, with increased traction control; Active is best for everyday driving, with an ‘EcoMode’ on the smaller screen to show the energy efficiency; Untamed, as the name suggests, makes the most of the performance, with changes to the steering weighting and a sharper throttle response. The one-pedal driving option, where acceleration and deceleration is controlled by the accelerator pedal only, works very well too. Again, you feel that weight in corners, but it remains positive and grippy.

As you would expect from a Ford, the Mustang Mach-E is one of the keenest driving EVs available. The steering in particular, is precise and responsive. When you factor in the 1-2% BiK for drivers over the next couple of years, it represents a very appealing package.

The Verdict
A Mustang in name only, but the Mach-E looks great, is good to drive with a competitive range compared to rivals. This Ford is also well-equipped, with a good infotainment system.