By Martyn Collins / 2 months ago / Road Tests / No Comments 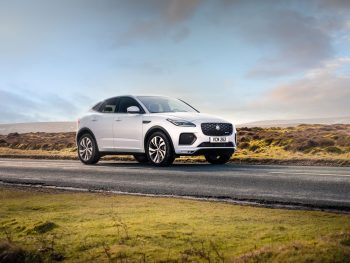 If you ignore the revised bumper, grille and LED headlights, this facelifted version of Jaguar’s baby SUV looks basically the same as the model launched four years ago.

But under the unchanged silhouette, things get more interesting as, like the Range Rover Evoque and Land Rover Discovery Sport before it, the E-Pace gets Jaguar Land Rover’s Premium Transverse Architecture Platform, developed to accommodate electrified powertrains, and thereby making this new plug-in hybrid version possible.

It features the same P300e powertrain as the Evoque and Discovery Sport, powered by an all-new 200hp three-cylinder version of the 1.5-litre Ingenium petrol, combined with a 109hp electric motor and 15kWh battery, both neatly hidden under the back seats.

Official WLTP fuel economy is 141mpg, acceleration to 60mph takes just 6.1 seconds and, like the Evoque, the PHEV version can travel on electric power alone for 34 miles (although we saw around 30 on our test route in cold conditions). With just 44g/km Co2 emissions, this E-Pace, like the Range Rover, falls into the 11% BiK bracket for 2021/22, making the plug-in version the pick of the E-Pace range for business buyers. Charging-wise, the P300e takes around 30 minutes to go from 0-80% via a 32kW or greater DC public charger or less than 90 minutes or around an hour and a half using a 7kW charger.

Available in S, SE and HSE trim levels, the P300e can only be specified with the sporty R-Dynamic pack, and prices start at £45,995. Apart from the facelift changes, the only visible difference for the P300e hybrid over other E-Pace models is the addition of an extra filler cap on the right for electrical hook up.

Inside, like the outside, the changes for the E-Pace are minimal, which is a shame as it doesn’t feel as modern as the Evoque. There is a 12.3-inch digital instrument cluster, with an extra gauge to show how much charge is in the battery, the new-to-E-Pace three-spoke multi-function steering wheel, plus an 11.4-inch touchscreen running JLR’s latest Pivi Pro multimedia systems.

The baby Jaguar SUV starts in full-electric mode, with an almost unnoticeable whine from the motor at the back. It is quick off the mark too and when the three-cylinder petrol engine cuts in, like the Evoque, the transition is almost seamless, so the only way to tell is to look at the instruments.

The performance from the engine is punchy, and the expected three-cylinder thrum is well supressed. The engine and motor also seem well-mated to the standard eight-speed transmission, with three-modes. Hybrid which mixes petrol and electric power, EV which means electric power only and a Hold mode to keep the charge you already have in the battery. The auto box chooses which power to go for well, but it’s a relaxing rather than a sporty drive.

The extra motor and battery add 220kg over the standard E-Pace, but the precise steering and tidy handling remain – although you can feel the extra weight and there is a little more body roll than before. The ride on our ‘S’ spec car with 20-inch wheels was still comfortable and refined.

However, the updates and addition of PHEV models are sure to appeal to fleet buyers that hadn’t considered the E-Pace before.

The Verdict
The savings make the E-Pace a no-brainer for fleet buyers. Better still, there are few compromises over the standard car. The only issue is from within – as the mechanically similar Range Rover Evoque does basically the same job.

Previous: Comment: Brexit and its impact on the EV market
Next: Electric Volkswagen ID.4 Pro Performance models open for orders