By Alex Grant / 5 years ago / Road Tests / No Comments

Increasingly segmented and technology-driven, the humble half-hour dealer test drive has become an inadequate way to get familiar with the latest cars. Like most plug-in hybrids, the Passat GTE certainly warrants more than a few miles at the wheel. 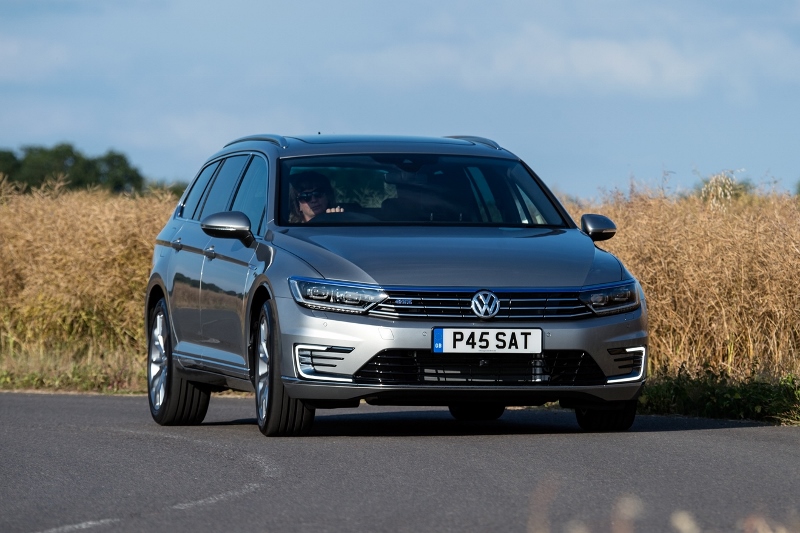 If nothing else, that might stop you from being seduced by first impressions. The Passat treads a line between the ‘premium’ and ‘mainstream’ cars in this class; it’s impeccably finished, understated and smart, and offers that familiar plug-in hybrid selling point of putting 215bhp into a 7% BiK band. But it’s a car with small print, which makes this a slightly more considered choice than it first appears.

Beneath styling which has a hint of the sporty R-Line trim, the GTE shares its drivetrain with the equivalent Golf. It’s a collaborative effort, utilising a 154bhp 1.4-litre TSI turbo petrol engine, and a 113bhp electric motor, the duo sharing a six-speed DSG transmission. Select the performance-biased GTE mode, and the Passat combines full electric and petrol power to reach 62mph in 7.6 seconds (a slightly brisker 7.4 seconds for the saloon).

Its advantage over, say, the most powerful 2.0-litre diesel in the range, is that this can also offer a little of the benefits of an electric car. So, plug the Passat into a wallbox for two and a half hours, and the 9.9kWh battery stowed under the rear bench will deliver a range of 31 miles, even up to motorway speeds. Selectable driving modes can also prioritise fully electric driving, or charging the battery with the petrol engine to cut exhaust emissions for urban parts of the route.

This isn’t difficult to adjust to. The torque from the motor hides the small capacity petrol engine, so acceleration feels brisk, and fuel-powered miles are undertaken with only the slightest hum once the battery range is exhausted. Once it depletes its electric range, the GTE becomes a regular hybrid, capable of ‘coasting’ under low loads while barely consuming any energy.

But it does leave a slight question as to where a car like this fits. The GTE is best as a car for short journeys, which is hardly typical territory for a large car like a Passat. Volkswagen’s electric range predictions are achievable with a gentle right foot, but, reset the trip computer after 25-30 miles, and you’ll find anything over 40mpg requires seriously delicate throttling and unnatural amounts of patience. Or a lot of flowing A-roads, which offer plenty of coasting opportunities.

Most Passat drivers would get significant better economy from an equivalent diesel, without the inconvenience of frequent charging. Though the arguments for a plug-in are rarely that simple.

The trouble is, it’s also not a great performance car, and even the noise-enhanced GTE mode doesn’t serve up an engaging point-to-point driving experience. That’s true of the Golf GTE, too, but the Passat’s smaller sibling has a history of desirable fast GTIs and GTDs to lean on. Volkswagen’s understated family carrier has spawned the supercharged G60 (in some markets), six-cylinder VR6, eight-cylinder W8 and even the 295bhp R36. When did you last see any of those on the road?

Of course, none of the above – including the high-performance diesel – can match the GTE’s tax benefits. Despite its £38,020 P11d value, it’ll set drivers back less in BiK than even the Bluemotion and, deployed correctly, could be more economical too. Though those who are concerned about running costs might also be wise to consider the more economical Golf GTE, or even the fully electric e-Golf. And drivers might well be swayed by similar propositions from BMW and Mercedes-Benz, too.

There are certainly drivers for whom the Passat GTE will be a great fit – an easy, capacious long-distance car with no range anxiety worries and respectable economy when needed, and an EV for town use for most of the month. But it’s worth getting past first impressions before making a call.

The Passat’s semi-premium aesthetics and sporty cues are certainly magnetic, and tax advantages help, but the GTE is neither easily good fun, nor easily economical.