Ionity is expanding its high-power charging network with the addition of a station in Gretna Green – said to be Scotland’s fastest EV charging station. 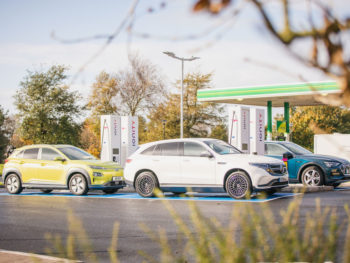 The new station is said to bring Scotland’s fastest chargers

The manufacturer-backed scheme – which recently gained Hyundai as a shareholder – is pushing ahead with expansion of its pan-European network, including in the UK, where it plans to add 40 sites, each with up to four 350kW chargers. This will include six locations in Scotland, of which the Gretna Green station – located at a forecourt run by Motor Fuel Group – is the first.

The 350kW chargers are open to all makes and models of EVs compatible with CCS chargers and are able to charge current and future EVs in less than 20 minutes. The new charging stations will also source 100% renewable energy.

The new sites are being added in line with Ionity’s plans to establish 2,400 chargers across Europe by 2020, enabling long-distance journeys, including for business drivers.

Minister of State for the Future of Transport, George Freeman MP, said: “The UK is in the vanguard of electrification of transport to reduce pollution. Through our Road to Zero Strategy we are funding major investment in vehicle charging infrastructure.

“Close collaboration with the private sector is crucial to achieving a zero-emission future and Ionity’s leadership is helping supercharge the UK’s charging infrastructure.”

The new station has been welcomed by local authority, Dumfries and Galloway, which this June passed a Climate Emergency Declaration, agreeing to a 12-point plan to reduce carbon emissions in the region to net zero by 2025, and committing to supporting communities and businesses to adapt to climate change

Cllr. Campbell, Dumfries and Galloway Council Environment and Climate Champion – who attended the opening ceremony – said: “Our declaration encompasses everything we will do to address Climate Change, building on our ongoing work already taking place within the council, including reducing our carbon footprint and emissions by adopting electric vehicles and encouraging our staff to be more environmentally aware. We are ambitious and our goal is to reduce carbon emissions to net zero by 2025 which will contribute towards efforts worldwide to limit global temperature rise to 1.5 degrees, but we need everyone to play their part and make changes to protect our natural environment.”