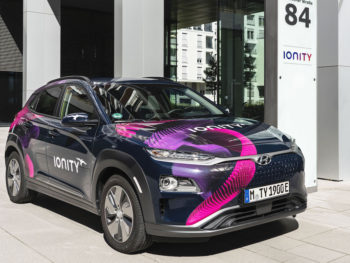 Hyundai is now a shareholder in the Ionity network

First announced in 2016 and founded in November 2017 by the BMW Group, Ford Motor Company, Daimler AG, and the Volkswagen Group with Porsche AG, Ionity already has a network of nearly 140 stations live in 14 European countries with a further 50 under construction. This includes the UK, where its second 350kW station recently went live, spearheading plans for a swift network expansion, including the mass roll-out of chargers at motorway services.

Hyundai Motor Group said its addition to the Ionity board – which is subject to clearance by the relevant authorities – shows its commitment to future electromobility; the carmaker already has a wide-ranging powertrain line-up, from the Ioniq trio and Nexo hydrogen fuel cell SUV to the Kona Electric and now Kona Hybrid. At the beginning of the year, the group announced plans to launch 44 electrified models on the market by 2025 – with forecast annual sales of 1.67 million units.

Thomas Schemera, executive vice president and head of product division at Hyundai Motor Group, said: “I am confident that our work with Ionity will open a new era of high-power charging experiences, where charging will be seamless and easier than refuelling for our customers.”

Ionity CEO Michael Hajesch added: “Hyundai Motor Group brings significant international experience and know-how with a full strategic commitment to e-mobility. The participation of new investors in Ionity is a clear signal of trust indicating that the work of our young company is already bearing fruit.”