Shell has added four hydrogen filling stations to its network in Germany, bringing the country’s strategically-deployed network to 32 sites. 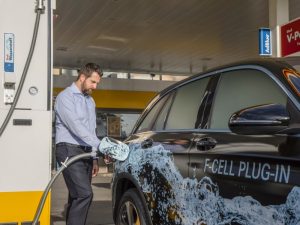 H2 Mobility is building a network of hydrogen stations across Germany

The network is being rolled out by German joint venture project, H2 Mobility, with the latest additions offering enough capacity to serve 40 cars each, per day. Expansion plans include 100 stations by 2018, and 400 by 2023.

Three of them were funded by Daimler, which now owns the sites in Wiesbaden, Pforzheim and Sindelfingen, the latter close to its research and development centre, where work is ongoing to launch its first hydrogen fuel cell vehicle, based on the GLC, which is due to be unveiled this year.

The fourth was commissioned by H2 Mobility, and is located on the Hanauer Landstrasse main road through the middle of Frankfurt. This uses technology from Air Liquide, while the Daimler sites were installed working with Linde. Stations in Wendlingen, Karlsruhe, and Munich in the south, and Bremen and Kassel in the north, are to follow before the end of the year.

Shell recently confirmed it would install 50kW rapid chargers at unconfirmed fuel stations in Greater London and Derby, as well as in Randstad, the western part of the Netherlands containing its four largest cities. The project is a partnership with Dutch charging point manufacturer, Allego, and the first units are scheduled to go live before the end of the year.