Toyota and Mazda have formed a partnership to co-develop electric vehicles, in a move aimed at increasing the speed at which new technology can be brought to market. 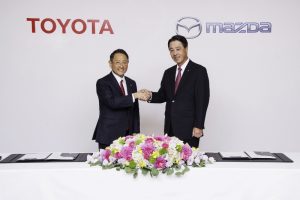 Toyota and Mazda will work together on technology, manufacturing and new models.

Signed in Tokyo today, the business and capital alliance builds on a two-year partnership founded in May 2015 – the two companies will acquire equivalent-value shares in each other as part of the deal.

Details of the EV collaboration have not been announced yet, but the partnership is said to enable the two companies to respond quickly to regulation changes and market trends.

Mazda has a hybrid version of the Axela (Mazda3 saloon) in Japan, and Toyota sells a plug-in Prius alongside its extensive hybrid line-up, but neither has an electric vehicle in its range.

The collaboration will also include joint ventures to produce vehicles in the United States, to work together on safety and multimedia technologies, and strategically developing models which can fill gaps in each other’s product ranges in specific markets.