Shift to EVs must be accompanied by more clean transport alternatives, says IPPR

The Government’s work to decarbonise transport is placing too much emphasis on the shift to electric vehicles without encouraging a shift to clean transport alternatives. 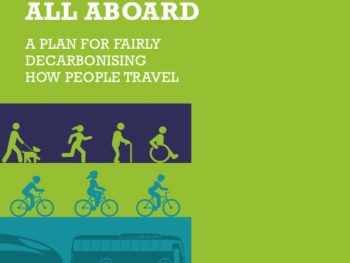 A new report from think tank The Institute for Public Policy Research (IPPR) analyses the Committee on Climate Change’s sixth carbon budget and shows that, without additional measures being put in place, the current approaches to reaching net zero could lead to significantly more cars on the UK’s roads.

It predicts there will be a 28% increase in car ownership between 2021 and 2050, with 10 million more cars on the road by the mid-century.

At the same time, there will be an 11% rise in car traffic while even more land will be required for car parking.

It also warns that an approach that places too much emphasis on the shift to electric vehicles – without also providing sufficient support for alternatives including affordable public transport, walking and cycling – would also likely benefit wealthy people more.

To counter this, the IPPR is arguing for a greater focus on affordable and clean transport alternatives to cut overall car use as it says we have a ‘once-in-a-generation’ opportunity to improve the way we all travel.

Its proposals include a call for a national guarantee for levels of transport and digital connectivity without needing to own a car. This must include seven-days-a-week public transport connectivity for all rural areas and the principle that everyday needs should be accessible within a 20-minute walk, cycle or public transport trip.

The IPPR also says the Government should introduce a ‘help-to-move-scheme’ to provide grants and loans to support people to buy cycles, electric scooters, e-bikes or electric vehicles where they need them.

It also calls for fair access to electric cars if and when they are needed, with a national electric vehicle charging rollout.

The IPPR also urges the Government to end all public procurement of carbon-emitting vehicles by 2022 and bring forward to 2025 the ban on buying combustion-engine vehicles for large commercial fleets, to ensure businesses take action to decarbonise their fleets.

And it says road space should be reallocated to cycling, walking and green space.

Luke Murphy, head of the IPPR Environmental Justice Commission, said: “The Government’s current preferred strategy places an overwhelming focus on the shift to electric vehicles. While superficially attractive because of its offer of continuity, such an approach will not deliver for people or planet.

“We need to massively expand the provision of and affordability of clean public transport options, such as trains, buses and trams, while helping more people to regularly walk and cycle, alongside a shift to electric vehicles for those that need them.”

In its response to the report, the AA highlighted how the EV revolution is “the most significant development over the last half century to help reduce transport CO2 emissions” while president Edmund King also called for individuals to choose the most relevant form of transport for specific journeys, including active travel.

But he added: “One must question whether some of the aspirations in this report are affordable, achievable or desirable such as having public transport running seven days a week in rural areas and ensuring that everyone is within 20 minutes walking, cycling or public transport reach of amenities. Some rural areas will remain dependent on road and private transport as public transport will never cater for all their needs.”

To access the IPPR report on ‘All aboard: A plan for fairly decarbonising how people travel’, click here.