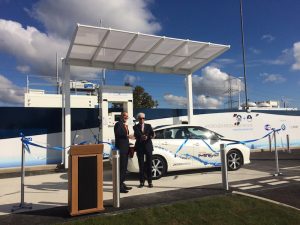 The hydrogen refuelling station in East London was opened to the public by Bill Williams, CEO of CEME and Prof Roger Putnam CBE, chairman of ITM Power

The new site is located at the Centre of Engineering Manufacturing Excellence (CEME) and uses solar energy from a solar PV array at CEME to make renewable hydrogen on-site.

The site is situated just off the A13, linking London City Airport and the M25, and is now available for public and private fleets.

The station marks the second of three to be deployed in the UK as part of the pan European HyFive project, which was funded by the European Fuel Cell and Hydrogen Joint Undertaking (FCHJU) and the Office of Low Emission Vehicles (OLEV).

Paul Van der Burgh, Toyota (GB) PLC president and managing director, commented: “This new facility demonstrates the growing momentum in the development of a new hydrogen fuel infrastructure in the UK. This is good news for customers who are keen to adopt the new technology and for the manufacturers of zero-emissions fuel cell vehicles, such as our own Mirai saloon.”

Previous: First Drive: BMW i3 94Ah
Next: New project to seek standardised method to control the charging of EVs