SPIE UK is to be responsible for the planning and design of electric charging stations at strategic locations along the United Kingdom’s major road infrastructure. 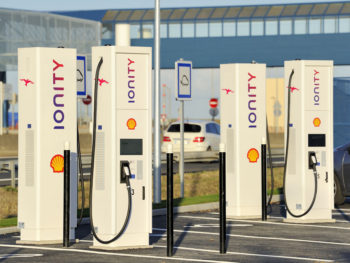 66 IONITY charging stations installed by SPIE UK are destined for the Netherlands, the United Kingdom, France, the Czech Republic, Hungary and Slovakia

Each station will provide six ultra-fast charging points, facilitated by a 1.25MW transformer with grid connection.

The work forms part of a pan-European contract awarded to the SPIE Group by IONITY to support the deployment of 400 high power charging stations across Europe by 2020.

Created in 2016 as a joint venture by car manufacturers BMW, Mercedes-Benz, Ford, Audi and Porsche (Volkswagen Group), IONITY, which is located in Munich (Germany), is building a network of high-power charging stations for electric vehicles across Europe. Mainly positioned along major roads, the 400 charging stations planned for 2020 will be fitted with an average of six charging points, each with a capacity of up to 350kW.

IONITY has commissioned SPIE to carry out two types of operations: the preparation of 66 charging stations in the Netherlands, the United Kingdom, France, the Czech Republic, Hungary and Slovakia and the deployment of 103 stations in Germany, Belgium, France, Poland, Hungary and the Netherlands. SPIE will be responsible for the various stages prior to the installation of the charging stations, including planning, compliance and preparation of the charging sites.

No CHAdeMO: The stations will feature the Combined Charging System (CCS) standard, as well as an electrical transformer adapted to the delivery of direct current. The deployment of the stations involves installing up to 6 charging points at each station, wiring and their connection to the network.

Depending on the vehicles’ being charged and their capability to accept rapid charge rates, the new 350kW stations can offer up to 186 miles of range from 15 minutes’ charge. In France, SPIE has already installed around ten charging stations and is planning to install 34 charging stations by 2020.

“In our view, SPIE satisfies a number of essential requirements: a strong presence in Europe thanks to its network of subsidiaries, a proven track record and the expert skills needed to design and install an electric vehicle charging station”, notes IONITY COO Marcus Groll.

Jérôme Vanhove, SPIE Group strategy, development and M&A director, added: “The continuous growth of this market consolidates our position as a key player in the Smart City, interurban infrastructure and energy transition markets”.

Previous: ‘Charging as a Service’ to help drive plugged-in fleet growth
Next: Audi to reveal next stage in electric mobility at Geneva