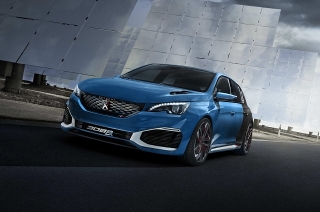 The 308 R HYbrid was developed by Peugeot Sport, the brand’s motorsport division, and features a drivetrain combining a 268bhp 1.6-litre turbocharged petrol engine with a 113bhp electric motor at each axle.

This allows four-wheel drive traction and blistering performance. The concept reaches 62mph in four seconds from rest, while the lithium-ion battery, rechargeable in as little as 45 minutes, enables fully electric driving which contributes to its low CO2 output.

Inside, the cabin features four individual sports seats with accents of red, while the extra power is handled by 80mm increases in front and rear tracks and upgrades to the car’s suspension and brakes. Styling is derived from the Quartz concept, shown at the Geneva Motor Show in March.

Bruno Famin, Director at Peugeot Sport, explained: “Peugeot Sport’s expertise applies an uncompromising approach to meeting targets. With our experience in hybrid vehicles developed with the Peugeot 908, the high-performance hybrid powertrain fitted to the 308 gives a glimpse of the potential for ultra-sports models in the future.”