Suzuki has confirmed details of its new ‘Across’ plug-in hybrid SUV, arriving this autumn as a rebadged version of the Toyota RAV4 PHEV and with CO2 of 22g/km. 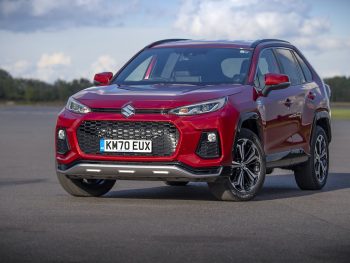 Priced at £45,599, it’s the first model to be supplied by Toyota under Suzuki’s tie-up with the carmaker signed a year ago and first announced three years ago; Suzuki’s version of the Corolla Touring Sports is to arrive next year and dubbed Swace.

The Across is also Suzuki’s first-ever plug-in hybrid and uses the same powertrain as the forthcoming PHEV RAV4, now due spring 2021 and yet to have its pricing announced. The plug-in hybrid set-up uses a higher-power 2.5-litre petrol than seen in the RAV4 hybrid, combined with a 182hp electric motor on the front axle and a 54hp motor on the rear, giving four-wheel drive and front:rear torque variation ranging from 100:00 to 20:80. Total power stands at 306hp with a 0-62mph time of 6 seconds.

The 18.1kWh lithium-ion battery is mounted beneath the floor and enables an electric-only range of 46.6 miles. Along with its 22g/km of CO2, this gives a Benefit-in-Kind rating of 6% for 2020/21 while combined WLTP fuel consumption is officially 282mpg.

Drivers can also select a trail mode to redirect torque to wheels with the most grip, maximising control on slippery surfaces.

The Across will be built in Turkey and goes on sale in the UK in November 2020 – but be warned that Suzuki is warning of very limited supplies in the first full year.