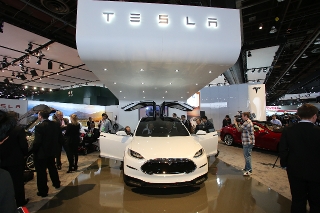 Speaking on Twitter, CEO Elon Musk said the price increase recognises the larger vehicle size and additional body complexity of the Model X. This would place the range between $80,000 and $110,000 in the United States (£53,000 and £72,000) but likely to be higher in European markets.

The SUV shares its skateboard-like platform with the Model S, with a flat battery pack under the cabin and an electric motor at each axle. It features seven seats with ‘Falcon Wing’ doors which open upwards and fold slightly in tight spaces. First deliveries are due late this year.

Musk added that the Model 3, its compact executive saloon car, will begin production in two years, but is reliant on the completion of Tesla’s ‘Gigafactory’ to meet battery demand. This will be unveiled next March, which suggests a Geneva Motor Show reveal, with orders beginning the same month and a range starting at $35,000 (£23,000) in the United States.