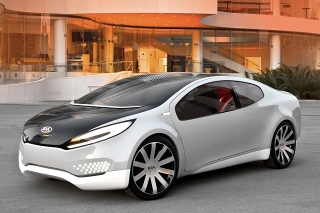 The newcomer is said to put Kia into a new segment, and it’s likely that this will share technology with Hyundai’s forthcoming hybrid-only model. News agency Reuters reported last month that Hyundai would also offer a dedicated hybrid product, and disguised prototypes have been spotted during on-road testing.

It’s part of an ongoing product offensive by 2018, beginning with the new Sportage and Optima this year. Kia has already confirmed that the Optima will be offered as an estate for the first time, previewed by the Sportspace concept shown at this year’s Geneva Motor Show, as well as a plug-in hybrid drivetrain – the latter likely to be based on the Hyundai Sonata’s petrol-electric system.

Hybrids form only part of this, as new models will also show Kia’s sportier side. GT Line trims, which offer chassis upgrades and sports styling, are being introduced on the new Sportage and refreshed Cee’d, and the first high-performance Optima is in the pipeline. A rear-wheel drive sports car, based on the GT concept, is due in 2017.

Three new products, likely to replace the Venga, Picanto and Rio, are due in 2017, while the final newcomer due in 2018 could be an all-new Cee’d.