Tesla has given a sneak preview of its forthcoming Model Y electric compact crossover with a teaser image. 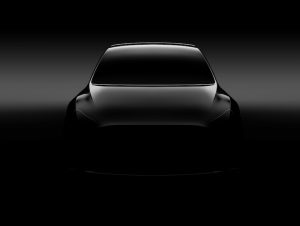 The Tesla Model Y will be built at its own factory, according to CEO Elon Musk.

The rather shadowy rendering was shown at the carmaker’s annual shareholders’ meeting where CEO Elon Musk confirmed that the new model, which is due to hit the roads in 2019 and will sit between the Model 3 and Model X, will be built on a new platform.

Musk said that although there had been criticism for not basing the new car on the Model 3 platform, he thought Tesla had “made a mistake in trying to derive the Model X from the Model S platform. It would have been better to just design an SUV the way an SUV should be designed, design a sedan the way a sedan should be designed – otherwise you’re trying to shoehorn something in that doesn’t make sense”.

Musk also said that demand for the Model Y – which will provide a rival to the Audi Q5, BMW X3 and Mercedes GLC as well to the forthcoming Jaguar I-Pace – will probably exceed that for the Model 3.

He also spoke of manufacturing improvements that could drop the capital expenditure by a factor of 2 between Model 3 and Model Y and “accelerate the readiness despite the new technologies”.

And the Model Y will also be built at its own factory, Musk announced, as the current Fremont site, which produces the Model 3 along with the Model S and X, is “bursting at the seams”.

Tesla also used the event to give a glimpse of its new semi-truck, due to be unveiled at the end of September with a working prototype.