A new battery-electric C-HR, plug-in hybrid Corolla and Levin models have been revealed by Toyota. 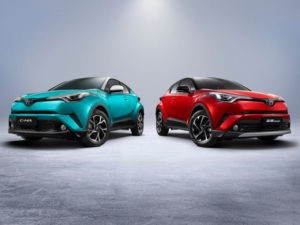 The new plug-in hybrid Corolla and Levin models are said to offer 30-miles electric range and are destined to go on sale in 2019, while the electric C-HR/IZOA1 is scheduled for 2020. The PHEV models are the first Toyota plug-in hybrids to be built outside Japan.

All the vehicles are being made for the Chinese market, the company said, and will be amongst 10 new electrified vehicles Toyota plans to introduce in China by the end of 2020.

In support of its electrified efforts, Toyota plans to build upon existing infrastructure that it has built in the country including plans to open a new battery testing facility at Toyota Motor Engineering and Manufacturing (China) (TMEC).

[/vc_column][/vc_row]
For more of the latest industry news, click here.