Volvo Cars has revealed the new XC40 T5 Twin Engine amidst plans for fully electric cars to make up 50% of its sales by 2025. 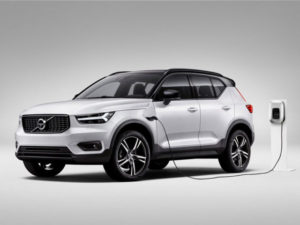 Marking its first public appearance, Volvo showed off the new XC40 T5 plug-in hybrid that will go on sale in Europe towards the end of this year the company previously confirmed.

Although Volvo has not yet released full specification, the car will be equipped with a three-cylinder petrol engine, powerful electric motor for electric-only driving and a large lithium-ion battery, likely to offer in excess of 20-miles range.

What can be seen from the photos is the T5 loses the Orrefors crystal gear selector seen in Volvo’s T8 plug-in hybrids, while the drive selector appears to include adjustable regenerative braking – with a -B+ symbol shown on the dashboard.

Despite the announcement being made in China and the earlier expectation of an all-electric XC40 for the Chinese market, Volvo did not make further mention of these plans.

The announcement to sell 50% electric cars by 2025 builds on Volvo Cars’ 2017 announcement to offer all new models released from 2019 with either a mild hybrid, plug-in hybrid or battery electric powertrain.

“Last year we made a commitment to electrification in preparation for an era beyond the internal combustion engine,” said Håkan Samuelsson, president and CEO of Volvo Cars.