Toyota has announced that it will establish an in-house venture company responsible for developing electric vehicles as it looks to accelerate its work in this area. 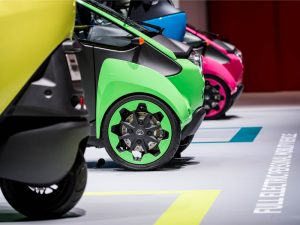 Toyota is to launch a venture company in December to develop EVs.

The carmaker has previously concentrated its efforts on hybrid and plug-in models such as the Prius as well as its recently launched Mirai hydrogen fuel cell car.

However, following reports last week in a Japanese newspaper that it is looking to mass-produce electric vehicles by 2020, Toyota issued a statement saying it would consider introducing EVs.

Now the carmaker has announced it will launch a venture company in December to develop EVs, using a small structure “help it implement unconventional work processes, leading to accelerated project progress and, thus, fast-to-market products”.

The company will be a virtual organisation, consisting of four people – one from Toyota Industries Corporation, Aisin Seiki Co. Ltd, Denso Corporation and TMC.

The carmaker again emphasised its broad brush approach to vehicle technologies but added that changing requirements were prompting it to venture into EVs.

In a statement Toyota said: “TMC has taken a multi-angled approach to introducing environmentally efficient vehicles, based on its philosophy of providing the right vehicle, at the right place, at the right time, developing hybrids, plug-in hybrids, fuel cell vehicles, EVs and others. It has placed a special focus on fuel cell vehicles, which in terms of cruising range, fuelling times and other aspects, offer convenience that is on a par with current petrol-powered vehicles, making them, in TMC’s view, ideal as a form of “eco-car”.

“However, different energy and infrastructure issues around the world and the rapid strengthening of regulations aimed at increasing the use of zero emission vehicles have heightened the need for product line-ups that can respond to various situations. As such, Toyota has decided to create a structure that will allow it to commercialise EVs at an early stage, along with its promotion of fuel cell vehicles, as an alternative means of achieving zero emissions.”

Previous: Half of Jaguar Land Rover line-up to have electric version by 2020
Next: ASA upholds complaints about Ecotricity Electric Highway ads