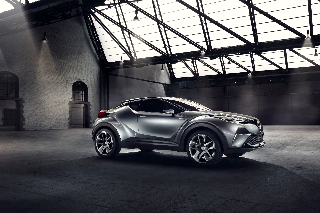 Set to be based on the C-HR concept shown at the Frankfurt Motor Show last year, the crossover will be smaller than a RAV4 and sales are expected to be weighted towards the hybrid version available from launch later this year, the manufacturer said.

Announcing the investment during a visit to the region, Edwina Hart, minister for economy, science and transport, commented:  “This is excellent news and I am delighted this very significant investment has been secured for Toyota’s facility here. It will not only provide a platform for growth in what is an extremely competitive market but will also help secure the long term sustainable future of the plant and safeguard skilled, well-paid jobs in the region.”

Deeside already builds petrol engines for the Auris Hybrid, and the added capacity for the new model will be funded by £7m provided by Toyota Motor Europe and the Welsh Government. Production of the crossover will take place in Turkey.

Dr Johan van Zyl, Toyota Motor Europe president and CEO, said: “The crossover market has been booming and will continue to grow in Europe and elsewhere.  We are entering the C-segment crossover market with a fantastic new product with a hybrid powertrain from the start.  It will provide our European operations with further perspectives for sustainable growth.”

Jim Crosbie, engine plant pirector, added: “Toyota has a long and successful record of building engines in North Wales. This announcement is a big vote of confidence in the high skills, quality and commitment of our workforce. Deeside was chosen to be Toyota’s first plant in Europe to manufacture a hybrid engine and we are proud to have delivered on that opportunity and to have now been selected to build this next generation hybrid engine.”