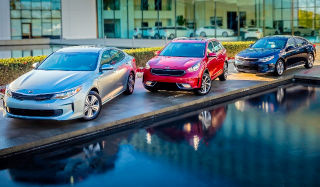 The Niro arrives this summer using a dedicated eco-car platform shared with Hyundai’s forthcoming Ioniq, which will be available with plug-in hybrid and fully electric drivetrains, the former also confirmed for Kia’s model.

Its wheelbase is slightly longer than the Soul’s, and the battery is located underneath the rear seats to avoid compromising interior space. Driving the front wheels is a new Atkinson Cycle 1.6-litre petrol engine, augmented by an electric motor and paired with a six-speed dual-clutch transmission. This produces a combined 144bhp, with CO2 emissions of 89g/km – equating to around 74mpg on the combined cycle.

The Optima plug-in hybrid will also launch this summer, powered by a 2.0-litre petrol engine and electric motor, the latter supplied by a 9.8kWh mains-rechargeable battery pack located under the boot floor and rear seats. This means the rear bench folds flat, and boot space isn’t as heavily compromised as it was in the old Optima Hybrid.

Kia has yet to reveal fuel economy figures for Europe, but has said it’s targeting a 27-mile electric range and 48mpg with the battery depleted, suggesting over 120mpg and 50g/km CO2 emissions on the NEDC for plug-in hybrids. Charging takes three hours on a dedicated point, and the neater packaging of the battery could also mean it’s available in the forthcoming Optima Sportwagon, which will be available in Europe later this year.

The new Optima Hybrid will only be available in left-hand drive markets, as its predecessor was. It benefits from the same improvements in packaging and also uses a 2.0-litre petrol engine, but with a much smaller capacity battery and less powerful electric motor.

Kia is aiming for a 10% improvement in fuel economy, but that’s based on North American versions of the Optima Hybrid, which had used a 2.4-litre petrol engine rather than the 2.0-litre used in Europe. A similar improvement on the European model would return at least 63mpg on the combined cycle, with CO2 emissions under 105g/km.