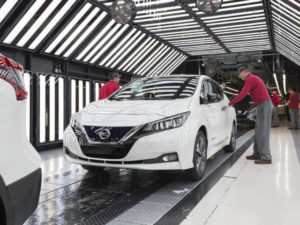 So says Britain’s largest union, Unite, as it points to the risk of falling behind in the EV marketplace.

In a new report, Electric Vehicles, Autonomous Technology and Future Mobility, the union highlights the need for government support to retool, reskill and develop the UK’s automotive supply chain, as it points to news that BMW’s electric Mini will be assembled in Cowley from 2019, but the electric powertrain and electric batteries will be imported from Bavaria. Similarly, Jaguar’s new electric vehicle, the I-Pace, will be built entirely in Austria.

The union also points to work by Professor David Bailey of the Aston Business School to uncover a series of more holistic measures that EV manufacturers and the government can adopt to remove barriers to wider EV take-up. These include using government investment to provide an incentive package that goes beyond ‘first wave’ consumers. Although Unite says that the UK Plug-In-Car Grant can successfully target such ‘first wave’ consumers or those who may have already been considering purchasing an EV, the report adds that “it pales compared to the £15,000 (€17,000) incentive package offered to Norwegian drivers over five years”.

Other measures include targeting procurement of company and public sector fleets; lowering car tax for company EVs; better marketing and awareness raising over range anxiety and the ability to recharge; greater vehicle choice; embracing new, flexible ownership models such as ‘on demand’ services; and a national car scrappage scheme to encourage sustainable transition from ICE and diesel models to EVs.

Unite general secretary Len McCluskey said: “The automotive sector has been a major success story of British manufacturing and our workplace reps and stewards have played an integral role in shaping that success.

“For decades the sector has been a source of good quality employment for hundreds of thousands of workers, in both major assembly sites and throughout the supply chain.

“No industry is static. The emergence of electric, internet-connected and driverless technology, herald changes unseen since the end of the horse-drawn era.

“Unite is clear. We want investment in new sustainable technology. We want to see high-skilled secure jobs on decent pay and for the UK automotive sector to hold its own against Germany, the United States, Southern Asia and China.

“The biggest barrier to investment and innovation remains government inactivity. Without proper investment in research and development, public infrastructure, procurement and public transportation, the UK will continue to lag behind.”

Previous: 2040 date for petrol and diesel bans must be brought forward, say MPs
Next: Pricing announced for higher-power Renault Zoe