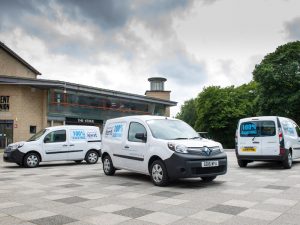 The university already runs the Renault Trafic and Master vans but has added the electric Renaults to its fleet in the latest development in its drive to meet the targets of its Carbon Trust Strategy, where it aims to lower its carbon emissions by 23% by 2020.

The vehicles replace equivalent diesel Renault Kangoo Vans and will be used to transport its maintenance teams, furniture and recycling around the 300-acre grounds of its Canterbury campus.

Gary Law, finance manager, University of Kent, said: “We were interested in the Kangoo Van Z.E as soon as it became available and it’s proved to be very suitable for our onsite requirements, while at the same time making a significant contribution to lowering our carbon footprint and perfectly conveying our drive to be a leader in promoting responsible vehicle use.

“Our onsite vehicles only cover around 2,500 miles a year, but it’s all stop-start driving and the Kangoo Van Z.E’s ease-of-use makes it ideal for nipping around the campus. On some occasions the vans are only used to transport a man with a tool bag, but the payload gives us the option of carrying bulky and heavy items, so it’s a great all-rounder for us.”