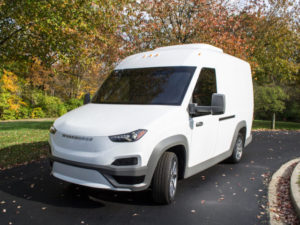 Earlier this year, UPS committed to buy 50 of Workhorses’s N-GEN vans, including providing input from the UPS automotive engineering team on the design and development of the planned test vehicles, planned for use on urban routes in the US including Atlanta, Dallas and Los Angeles.

In its financial results for the first quarter ended 31 March 2018, Workhorse said it had received a binding agreement from UPS that it would buy 1,000 N-GENs in total.

UPS said in February that the vehicles were claimed to provide nearly 400% fuel efficiency improvement as well as a better driver experience, and would have a range of around 100 miles between charges, equipping them for urban and inter-urban use.

Speaking at the time, Carlton Rose, president, global fleet maintenance and engineering for UPS, said: “Electric vehicle technology is rapidly improving with battery, charging and smart grid advances that allow us to specify our delivery vehicles to eliminate emissions, noise and dependence on diesel and gasoline. With our scale and real-world duty cycles, these new electric trucks will be a quantum leap forward for the purpose-built UPS delivery fleet.”

The UPS background in EVs stretches back to the 1930s when it first deployed them on its US fleet before re-exploring them in 2001 – it now has more than 300 electric vehicles deployed in Europe and the US, and has said that by 2020, it plans that one in four new vehicles purchased annually will be an alternative fuel or advanced technology vehicle, up from 16% in 2016.

UPS also announced last month that it was working with UK electric truck manufacturer Arrival to deploy a fleet of 35 electric delivery trucks in London and Paris, with the first vehicles due on fleet by the end of the year. And in April UPS said it had installed a new charging system featuring static batteries for energy storage at its Camden depot, which could recharge a fleet of 170 electric delivery vehicles without upgrading the power supply from the grid.