Wavendon House, a Grade II listed former outpost of Bletchley Park, has been fitted out with EV charging for residents with the help of funding from Milton Keynes Council. 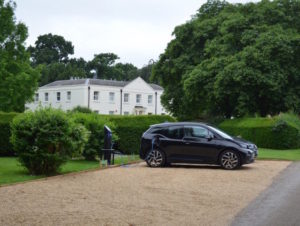 Wavendon House has been fitted out with a Chargemaster charge point

The 17th-century manor house was home to five of the famous code-breaking ‘Bombe’ machines from Bletchley Park by the end of 1941, with 14 Bombes removed when it finished operations.

It has now been equipped with a new ChargemasterFastcharge unit under Milton Keynes Council’s ‘MK Promise initiative’. This enables local residents to apply for a UK-made Chargemaster charging point to be installed free of charge by the council if they do not have private off-street parking, for example their own driveway.

Brian Matthews, head of transport innovation at ‎Milton Keynes Council, welcomed the house becoming the first MK Promise to be met by the council and added: “We are expecting to deliver more of these over the coming months, with many requests already in the pipeline for delivery.”