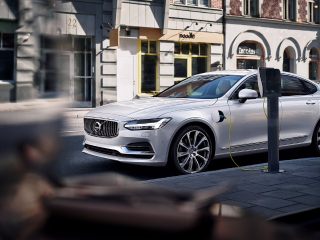 Announced as part of its new sustainability plan, the company said it will offer two plug-in versions of each model in its range, with the first all-electric vehicle launching in 2019, as well as promoting the technology among consumers.

Håkan Samuelsson, president and chief executive, said: “It is a deliberately ambitious target. It is going to be a challenge, but Volvo wants to be at the forefront of this shift to electrification.”

Volvo offers plug-in hybrid versions of the V60 in Europe, S60L in China and XC90 globally, and will soon have similar ‘Twin Engine’ technology in the S90 saloon and V90 estate. Its entire range will soon be underpinned by two platforms, for large and for small cars, and both are designed for hybrid and electric drivetrains.

Volvo sold around half a million cars globally in 2015, but wants to reach 800,000 by the end of the decade. Plug-in sales will be a cumulative figure, but around a quarter of XC90 orders in the UK are taking the T8 Twin Engine drivetrain.

Previous: Honda confirms PHEV and EV versions of Clarity Fuel Cell
Next: A Focus on Features