Volkswagen has said future electric vehicles and components will be built by its plant in Germany as looks to streamline operations under a €3.5bn restructuring plan. 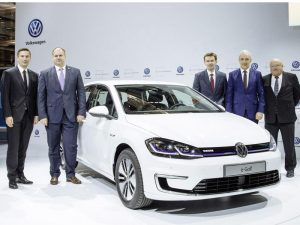 Volkswagen e-Golf at its unveiling at the Dresden factory in Germany.

Intended to transform the brand by 2020 and revive its fortunes in the wake of the emissions scandal, the plans will see VW put the focus on e-mobility and digital services while cutting 30,000 jobs, including 23,000 in Germany, to save €3.7bn per year by 2020.

In a statement, the carmaker said: “The German plants are to enter the field of developing and producing electric vehicles and components. A pilot plant for battery cells and cell modules is to be developed. At the same time, the future of the conventional units is to be safeguarded. All in all, Volkswagen will be investing €3.5bn in the transformation of the company.”

The plan comes as VW reveals the new e-Golf which will be produced at its Dresden, Germany, factory which becomes a production facility again and is being branded as a “Center of Future Mobility”.

General Works Council chairman Bernd Osterloh said: “With the pact for the future, we will be entering the field of next-generation e-mobility. The new cars based on the Modular Electric Drive Kit and electric components from our plants will make our German locations pioneers of electrification within the Volkswagen Group. The Works Council has ensured that these future-oriented vehicles will be made in Germany and not in other countries. Of course, the pact for the future has positive and negative aspects. However, it represents an acceptable compromise for both parties, reached after a long struggle.”