The switch to electric for all new cars and vans should take place by 2030, backed by extended incentives, as the next step in the UK’s green recovery. 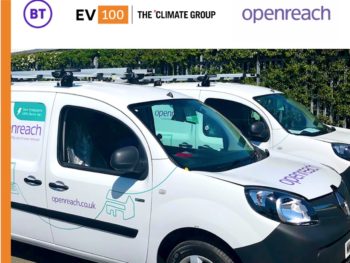 While a public consultation is currently underway on whether the original phase-out date of 2040 for internal combustion engine (ICE) vehicles could be brought forwards to 2035, or even 2032, a coalition of major UK fleets say that 2030 is actually an achievable target – but barriers remain to this and must be addressed.

Warning that the longer these barriers are in place, the more difficult it will be to achieve even the current 2040 target, the UK Electric Fleets Coalition – led by The Climate Group in partnership with BT Group and Openreach – has outlined in a new policy paper how the Government could address obstacles to an earlier switchover. And it says any measures would be supported by its members.

Highlighting how it is both crucial, but also beneficial for the UK to be a leader in the transition to EVs, the coalition has outlined a recommended package of measures that cover ways to boost the EV business case, stimulate EV manufacturing and strengthen the charging network.

As well as setting a target of 2030 for 100% of new car and van sales to be fully electric by (with exceptions for the small number of vehicles where this may not be possible), the group says the Government should stimulate supply to meet business demand. This could be carried out by introducing a zero-emission vehicle mandate to require vehicle manufacturers to produce an annually increasing percentage of zero-emission vehicles.

And to stimulate demand itself further, the coalition is calling for the Government to extend grants for electric vehicles and charging points through to at least 2022, when EVs are expected to start competing on price with conventional vehicles. Although the Plug-in Vehicle Grants and charge point grants were extended this spring, both have reduced funding and remain only short term. The PiVGs only run until 2022-23 while the charge point grants have been confirmed to run until April 2021.

Finally, the coalition members say the Government should invest in infrastructure by speeding up the rollout of public charge-points across the UK for use by any payment system.

Helen Clarkson, CEO of non-profit organisation The Climate Group, said the programme of measures could help the UK “build back better from the Covid-19 crisis” and bring huge opportunities for jobs and growth.

Both of these are points made by the Committee on Climate Change’s June 2020 progress report, which included new advice to the Government on securing a green and resilient recovery and recommended that Ministers seize the opportunity to turn the Covid-19 crisis into a defining moment in the fight against climate change. It also underscored the Committee’s assessment that the 2040 date for the petrol and diesel ban should be brought forward to 2032 at the latest, and backed by detailed policy arrangements to deliver it.

The Climate Group’s Helen Clarkson also said that action by the Government would help businesses with ambitions in moving to clean electric transport; comments echoed by the coalition’s members.

Philip Jansen, BT Group chief executive, commented: “The switch to low- and zero-emissions vehicles is a key element in our carbon strategy and this new partnership will be critical in allowing us to make the switch.”

Clive Selley, CEO, Openreach, added: “With the country’s second largest fleet of vans, I want Openreach to play a leading role in the UK’s transition to low carbon vehicles. But there are still some major hurdles to overcome. For example, the kinds of vehicles, scale of manufacturing, supply-chains and infrastructure needed to electrify large fleets like ours simply doesn’t exist today. So, we need Government support to make the transition faster and fuller, and the commitment to maintaining plug-in grants is a welcome first step.”

Other members of the coalition include Mitie, Centrica, LeasePlan, Tusker, Fleet Alliance and  Hitachi Capital UK. Many members are also part of The Climate Group’s EV100 global corporate leadership initiative on electromobility.

Alfonso Martinez, managing director of LeasePlan UK, said: “The air quality emergency we faced before Covid-19 is still an emergency today. That’s why LeasePlan, along with the UK Electric Fleets Coalition, is standing firm in our call for an accelerated transition to EVs and a comprehensive package of measures to speed up EV uptake. These include setting a 2030 target for vehicle switch over; extending grants for electric vehicles and charging points until at least 2022; and accelerating the rollout of public charge-points across the UK. Together, we’re determined to tackle climate change and improve air quality in our towns and cities.”