Peugeot has extended its 3008 line-up with a plug-in hybrid model offering CO2 emissions of 29g/km, bringing a rival to the imminently arriving Hyundai Kona Hybrid. 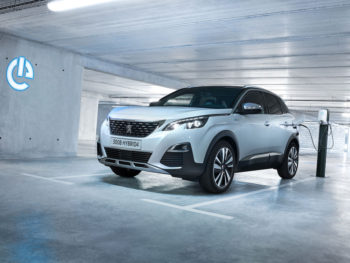 Available to order from late 2019 and due to be joined by PHEV versions of the new 508 Fastback and 508 SW estate – part of plans to have electrified versions of every model in the Peugeot line-up by 2023, the 3008 GT Hybrid4 is powered by a 1.6-litre PureTech petrol engine and two electric motors, giving a combined 300hp and a 0-60mph time of 5.9 seconds.

The 13.2kWh battery can be fully charged in less than two hours using a standard 7kW charging point and provides an electric-only WLTP-rated range of 36 miles while its 29g/km of CO2 puts it in the 10% BiK bracket for 2020/21.

The Hybrid4 model – which bears the distinction of being the first 3008 with four-wheel drive – will be followed by a 225hp front-wheel drive version after launch. This will combine a 180hp PureTech petrol unit, with an 80kW electric motor, located on the front axle, and featuring Peugeot’s EAT8 eight-speed automatic gearbox. Economy figures have not been released.