From 1st July, all new private and commercial electric and hybrid vehicles with four or more wheels must have an Acoustic Vehicle Alert System (AVAS) fitted. 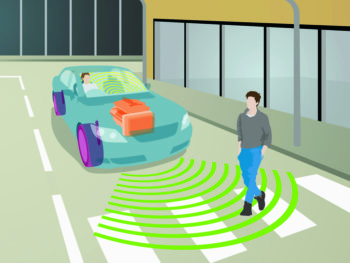 The new legislation aims to make electric and hybrid vehicles more audible to other road users at slow speeds, before tyre noise takes over

The EU ‘Regulation on the Sound Level of Motor Vehicle’ (EU 540/2014) in combination with EU Requirement ECE R138, will ensure such vehicles are more easily heard by pedestrians, cyclists and vulnerable groups and follows more than a decade’s worth of campaigning by groups such as the European Blind Union.

The regulations state AVAS shall be activated for vehicle speeds up to 20km/h (12.43mph), with a minimum sound level of 56dB; equivalent to the sound level of an electric toothbrush or paper shredder. The legislation also dictates the AVAS sound ‘should be a continuous one providing the vehicle driving behaviour to other road users and pedestrians.’ For example, generating changes in sound level and pitch to signify acceleration.

The legislation does not, however, affect already built vehicles, although many including the Renault Zoe, Mitsubishi Outlander PHEV and Jaguar I-Pace already include a sound emitting system at low speeds, where electric vehicle’s silent nature is deemed to be more dangerous.

Controlled and artificial sound emission by an electric vehicle is, however, said to be more effective than that of a traditional engine that naturally produces its own sound, as artificially produced sound can be directed ahead of the vehicle, which is said to aid visually impaired persons. At present, the sound emitted from a petrol or diesel engine can be difficult to determine its direction, due to engine sound insulation and exhaust pipes more often than not placed at the rear of the vehicle.

Since 2009, acoustics firm Harman has been developing its own AVAS system called external Electronic Sound Synthesis (eESS) under the HALOsonic active noise management solutions portfolio, thereby helping a number of OEMs adopt the technology ahead of the deadline.

Harman’s eESS creates a specific sound that is projected from speakers positioned at the front and rear of the vehicle. Speed and throttle position sensors determine the volume and characteristics of the eESS signal warning pedestrians of an approaching vehicle.

“Given the ever-increasing number of hybrid and electric vehicles on our roads, the risk to pedestrians, cyclists and vulnerable groups has risen exponentially over the years,” says Rajus Augustine, senior director Product Strategy & Planning, Car Audio at Harman. “AVAS technologies such as HALOsonic eESS offer an affordable and effective way of increasing pedestrian awareness of an approaching EV in noisy urban environments.”

Although not mandated by the EU legislation, Harman’s system is also modular to offer in-cabin sound to provide acoustic feedback on vehicle status thereby ensuring the driver is more connected to the vehicle, the company said. For example, the welcome sound when the electric motor kicks-in or the shutdown sound when the motor is switched off, provide the driver with acoustic cues, which otherwise would not be present in an EV. Moreover, eESS can be tuned to meet customer specific requests and/or comply with market specific regulations, such as in the US where eESS should be active even at speeds of 30km/h (18.64mph).

Additionally, HALOsonic lets carmakers create custom-designed sounds, thereby helping OEMs have a sound-signature that reflects the brand DNA of their cars. “Be it a sporty engine sound or a spaceship-like drone sound, HALOsonic is proud to be a key enabler for OEMs in their pursuit to stay a class apart without compromising pedestrian safety,” concludes Augustine.

electric carHarmanHybridRegulation on the Sound Level of Motor Vehicle