A new era for electric vehicles?

By Contributor / 5 years ago / Features / No Comments 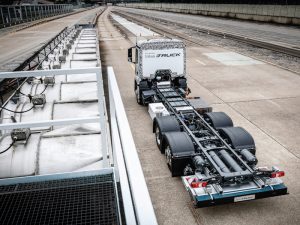 Battery technology is moving on apace.

Until recently, the prospect of a battery electric heavy truck was more-or-less impossible, because the weight of the battery pack would have reduced payload to an unacceptable extent.

But Daimler’s Urban eTruck, claimed to be the first 26-tonne gross vehicle weight (GVW) heavy truck with a battery-electric driveline, shows there’s plenty of potential for the technology.

On display at its debut at the IAA Hannover Truck Show will be a three axle heavy-duty urban distribution vehicle, based on the Mercedes Antos heavy truck range. A production version is not expected to appear until around 2020.

This features two liquid-cooled traction motors mounted inboard of the brake assembly. Each can produce up to 168bhp with maximum torque of 369lb/ft, while offering regenerative braking resistance of up to 180kW.

With reduction gearing, up to 8,113lb/ft of torque is available at each rear wheel. Additional drive axles can be added if required, and lighter two axle versions could also be produced.

The truck has a design range of around 124 miles fully charged, enough for a day’s operation for a vehicle covering an urban distribution route, reckons Mercedes. The company says that this includes the use of air conditioning and ancillaries.

Factoring in a European Commission weight allowance of an additional 1,000kg for alternative fuel vehicles to help compensate for the weight of the batteries could mean that the actual payload allowance would only be reduced by 700kg compared with a diesel-powered model. Total battery weight is said to be 2,500kg.

Mercedes expects battery technology to continue rapid development in the next few years, raising energy density even further. This could result in the payload penalty being reduced much further or eliminated altogether, before production begins.

Over the same period, energy density is expected to rise by a similar factor, from 80Wh/kg to 200Wh/kg.

All this is good news for smaller EVs with a prospect of far greater range in the next few years. A realistic range of 200 miles for ordinary production electric cars and light CVs would be a game changer, practically eliminating ‘range anxiety’.

Without an engine and gearbox there is space under the cab for one lithium-ion battery in the eTruck. The other two batteries are also fitted between the chassis rails under where the body would be fitted. Mercedes quotes total battery capacity of 212kWh – equivalent to almost 10 Renault ZOE batteries.

The truck comes with a Combined Charging Standard (CCS) connector, as used by most European manufacturers, for rapid charging at up to 150kW – three times the speed offered by many of today’s EVs, and faster than Tesla’s Superchargers.. While the maximum rapid charging via CCS in Europe is 50kW, Mercedes expects 100kW to become available soon.

Using this, it should be possible to recharge a set of batteries in two hours.

It also offers 20kW AC charging via the commonly used Type 2 connector, taking ten hours to fully charge. These are also technologies which can be applied to cars – most of which only offer 3.6 or 7.2kW AC charging, relying on a DC connection to top up faster.