A range of incentives

By Natalie Middleton / 4 years ago / Features / No Comments 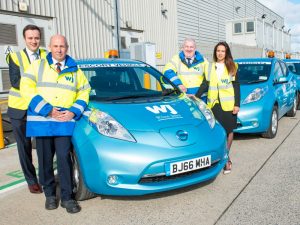 The Wilson James team has had a positive experience with its switch to EVs.

Although analysts predict that it’s not until 2022 that the total cost of ownership of electric cars will fall below those with internal combustion engines, security, logistics and business services provider Wilson James has already reduced its fleets costs by making the switch to EVs.

The firm has replaced seven of its diesel fleet cars with Nissan LEAFs for use under its Heathrow Airport contract.

The LEAFs, which were supplied by West Way Nissan, are being used by security personnel at the huge off-site facility for the screening of construction materials the company operates for the airport.

Although Wilson James recognised the fuel savings it could achieve by replacing its diesel vehicles, environmental concerns were its top reason for going electric, and in line with the airport’s own ambition to be sustainable and to reduce its carbon footprint.

Mark Dobson, CEO of Wilson James, said: “This is a long-standing and important client and as part of our commitment to them, we wanted to make sure we were taking our own steps to become more sustainable.”

But as well as citing benefits in raising the profile of the company on the airport and also to the general public, Wilson James has also reported fuel savings of over £13,000 since October 2016.

And the firm also says the vehicles have gone down well with drivers. Wilson James opted for the LEAFs after carrying out conducting research across the electric car range and chose the Leafs based on their design, comfort and practicality as well as the range. After six months behind the wheel, feedback from the drivers is that they are more comfortable during their working shift and that vehicles are easier to drive.

The company also says it had no teething problems at all implementing the vehicles. Charging infrastructure was installed specifically for the fleet by Heathrow and means Wilson James can have two vehicles on charge at any one time – enough to keep the whole fleet running at any time. The company has since gone on to add one Nissan LEAF and one Nissan e-NV200 electric van to its fleet at client DP World London Gateway.

Wilson James also has advice for any other fleets looking to go electric: “Make the investment; it is good business sense in every way,” states Mark Dobson.