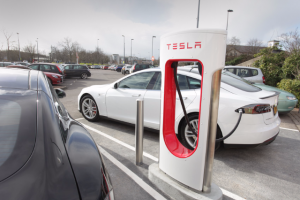 The ASA rejected accusations made about the speed of Tesla’s charging points.

Ecotricity, which operates the Electric Highway rapid charging network, has been engaged in a long-running dispute with the Californian carmaker which stems from a failed collaborative project for the two companies to share charging sites along motorway routes. This had been settled out of court during 2015, according to Ecotricity’s Twitter feed.

However, the ASA said Ecotricity had recently challenged Tesla’s claims that its Superchargers – its own network of ultra-fast charging points – are the fastest in the world, as well as questioning the claimed £6,000 in petrol savings over a five-year ownership period.

Tesla responded by pointing out that current EV battery technology is the bottleneck for charging speeds, not the actual maximum output of the charging points. It explained that its Superchargers are able to charge at 120kW today, which is the highest output on the market.

It said that fuel savings had been calculated based on data gathered from owners, combined with average fuel prices over a six-month period to February 2015 and a European Commission report on domestic energy prices per kilowatt-hour. This was compared to the 39.2mpg average economy of a BMW 535i saloon. Tesla added that the estimated 10% of charging done for free at Superchargers was conservative compared to the 19% averaged by UK drivers.

ASA said neither of Tesla’s claims is misleading, which means no changes are necessary.

The claims mark the second time this year that Ecotricity and Tesla have locked horns through the ASA. In April, the agency rejected claims from Tesla that Ecotricity’s electricity and energy was the greenest in the UK after the utility company was able to provide proof that this was the case.