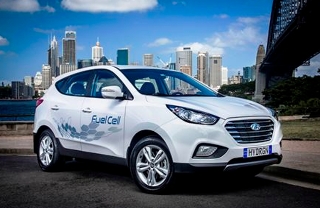 The Hyundai SUV ix35 Fuel Cell arrived in Australia in June 2014 and has been undergoing operational trials since.

The site is currently using hydrogen provided by gas partner Coregas Australia, but soon to be creating its own hydrogen onsite through the use of an electrolyser and harnessing solar power.

The unveiling comes as the Australian government announces plans for a ‘Hydrogen Highway’ between Melbourne and Sydney to mirror similar projects in California and Europe.

He added that the Commonwealth Scientific and Industrial Research Organisation (CSIRO) is also developing scientific capabilities and new technologies relevant to hydrogen, including research into membrane and separation technologies and the solar conversion of natural gas to syngas.

Hyundai Motor Company Australia CEO, Charlie Kim said: “In February 2013, Hyundai Motor Company became the first automobile manufacturer in the world to begin mass-production of a hydrogen-powered vehicle – the ix35 Fuel Cell. The fact that we have brought one to Australia is testament to how important the Australian market is to Hyundai, and how seriously we take our environmental responsibility.