BP Pulse is opening a network of charging hubs across the UK, “significantly” expanding its ultra-fast charging infrastructure. 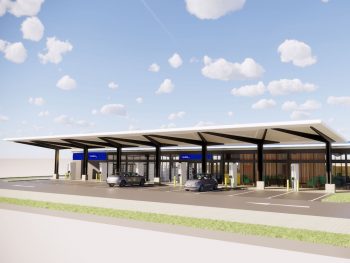 The first charging & convenience hub will go live later this year and will include 24 ultra-fast charging points.

The number of future hubs has not been announced but BP says they will target areas with high volumes of traffic, including alongside the UK’s motorway network.

The network is being developed in partnership with The EV Network (EVN) and will tailor each hub to the location, with some being positioned as EV convenience and mobility hubs offering food, drink and other facilities to drivers as they charge.

This will bring the fight to Gridserve, which is developing a network of 100-plus Electric Forecourts across the UK, focused on low-cost, ultra-fast charging, backed by renewable energy and a convenient, driver-focused experience. The first Electric Forecourt has already opened in Braintree, Essex.

BP Pulse said its new hubs will be a key part of the company’s ambition to deliver fast and convenient charging for the growing number of EV drivers.

CEO Matteo de Renzi said: “We are building a charging network that will give consumers the confidence to make the switch to EVs, knowing they can get the charge they need in the right places. We’re taking another step forward in our commitment to make ultra-fast charging widely accessible across the UK, including in easy reach of the motorway network. These new hubs will complement BP Pulse’s existing plans to expand the number of ultra-fast chargers on BP’s forecourts and it’s exciting to be launching this new additional option for drivers.”