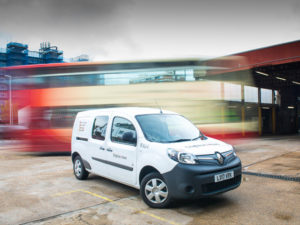 The company, part of the Go Ahead Group, stated that the Renault Kangoo Van Z.E. made sense financially in terms of running costs, but also in terms of overhead costs – with the purchase of the full electric van fleet helping to future proof the company from potential fuel duty and taxation increases. The vans are Congestion Charge exempt, eligible for the upcoming Ultra Low Emission Zones (ULEZ), eligible for the Government Plug-in Van Grant (PiVG), and are VED exempt.

Steve Ambury, engineering director of Brighton & Hove Buses commented: “We needed a van that not only worked for us financially but one that is moving the game forward. The Renault Kangoo Van Z.E. perfectly suits our requirements whilst reducing the companies’ tax liabilities and carbon footprint.”

Previous: PHEVs now “over 25%” of 3 Series Fleet volume
Next: EU-LIVE takes on the Twizy with new EV mobility solution