Centrica, SSE and Mitie to go electric by 2030

Major fleet operators Centrica, SSE and Mitie have pledged to go electric by 2030 – cutting emissions from more than 21,000 vehicles. 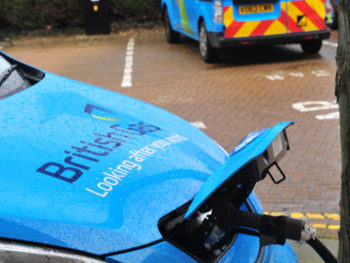 British Gas parent Centrica has committed to go electric on its 12,500-strong fleet of vehicles – the third largest commercial fleet in the UK – by 2030

The firms have become the latest to join The Climate Group’s global EV100 initiative – which launched in 2017 with EV commitments from firms including LeasePlan, Ikea and Deutsche Post DHL Group – and represent some of the UK’s biggest buyers of commercial vehicles.

British Gas parent Centrica operates the third largest fleet in the country, running around 12,500 vehicles. James Rushen, group head of environment for Centrica plc, said the direction of travel for the firm’s fleet was clear, adding: “We’re proud to be supporting our customers and the wider industry as we continue to understand the implications of EV roll-out at scale.”

Alongside committing to go electric on its fleet by 2030, Centrica has also announced the expansion of its digital service, Local Heroes, to offer homeowners EV charging installations. The British Gas-backed service hopes to gain around 10-15% market share of all domestic charge point installations in the UK, helping users to pick their charger and unlock government grants towards the cost. The company is training its smart meter engineers to help meet the growing demand for home chargers, much of which is expected to come via the Local Heroes application process.

For energy utility SSE, the EV100 pledge will see it switch its fleet of 3,500 vehicles to electric and install charging points for its 21,000 employees to use. It’s also joining The Climate Group’s EP100 initiative, committing to double its energy productivity by 2030 from a 2010/11 baseline.

Facilities management giant Mitie has committed to transitioning its fleet of 5,300 vehicles to electric by 2030, which it says is subject to the availability and affordability of the right vehicles and adequate public charging infrastructure.

This is in addition to its commitment of moving 20% of its 3,500-strong small van and car fleet to EVs by 2020 and installing 800 new charging points at both its office and client locations, as well as at employee’s homes.

Mitie is also in discussions with suppliers to negotiate a deal for renewable energy, which it plans to make available to its electric vehicle drivers. This builds on the deal already in place for Renewable Energy Guarantees of Origin (REGO)-backed power to the charging points at Mitie offices.

Simon King, fleet and procurement director, said: “We are incredibly proud to be leading the way in transitioning our fleet to electric vehicles. We want to encourage more companies to follow suit, which is why supporting initiatives such as EV100 are increasingly important. We are keen to support like-minded companies who also want to reap the same rewards and limit their impact on climate change.”