Former Plugged-in Places charging scheme, Source East, is to close at the end of the month, with Chargemaster offering hosts complimentary upgrades to join its own POLAR network. 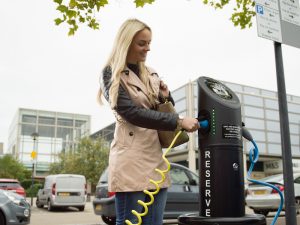 Set up in 2011, Source East was one of eight government-supported ‘Plugged-in Places’ schemes nationwide, set up to offer free charging for drivers. Run by EValu8 Transport Innovations and UHV with public and private partners, it had carried on operating beyond the four-year funding programme, but said this had become unsustainable.

Some units began transferring to the pay-as-you-go GeniePoint network, operated by ChargePoint Services, as of last year, but not all of them had proved compatible with its back-office – an increasing amount of cost had been passed back to Evalu8 and UHV, who took the decision to stop operating the network.

As of the 1st April, upgraded ChargePoint Services sites will be available for free through the GeniePoint network, while Chargemaster will add its units to the POLAR network. Source East said the remaining Charge Your Car and POD Point units might be accessible through their respective networks, and advised hosts and drivers to contact suppliers.

Chargemaster is also providing a complimentary upgrade, maintenance and communication package for hosts, as well as free rapid charging points, for those who join the POLAR network. Upgrades and maintenance on existing hardware will also be managed by the manufacturer, it said.

David Martell, Chargemaster CEO, explained: “I’m sure it will come as welcome news to EV owners in the area that several Source East charging points will enter the POLAR network. Drivers will no longer need to put up with an unreliable and under-funded network, giving them complete peace of mind when travelling in the area.”

Chargemaster already operates a large number of the UK’s ex-Plugged-in-Places points, having added the Plugged-in Midlands network to POLAR and acquired Elektromotive’s Charge Your Car network last year. Charge Your Car, launched as the North East’s scheme, had previously taken on the Greater Manchester and Scotland schemes. Source London is operated by the French group Bollore.