ChargePoint is to open a series of new rapid charging locations in central London as it supports the newly announced EV Infrastructure Delivery Plan. 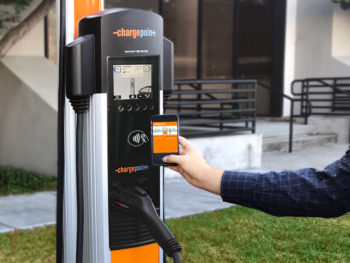 Spearheaded under the Mayor and Transport for London’s EV Infrastructure Taskforce launched a year ago, the plan – revealed today – sets out how EV charging will keep pace with anticipated take-up of ultra-low emission vehicles up to 2025.

The plan – the result of work by more than 140 organisations under the Mayor’s Electric Vehicle Infrastructure Taskforce – calls for the creation of at least five rapid charging hubs across London.

ChargePoint, one of 16 key stakeholders in the Taskforce, has outlined its support for the plan by saying it’s committed to delivering the hardware and software solutions for at least one rapid charging hub in the coming years. The firm has also revealed today that it’s deployed five public 50kW rapid charging locations – situated across Central London in Q-Park car parks at key locations including Knightsbridge, Chinatown and Tower Bridge.

Mark Kerstens, vice president, global fleet solutions, ChargePoint, said: “We welcome the launch of the Electric Vehicle Taskforce Deliver Plan today and applaud the Mayor for taking the bold measures required to tackle London’s air pollution while enabling the expansion of EV charging throughout London. Public–private partnerships like this are vital to ensuring the buildout of the new fuelling network that will support the adoption of more electric vehicles in London and around the United Kingdom. When these measures are implemented in full, London will become a model for clean mobility and one of the most EV-friendly cities in the world.”