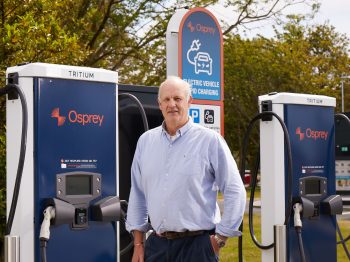 Bamberg founded ChargePoint Services in 2010 and established its GeniePoint charging network. Within two years the company had won the contract for the 2012 London Olympics, and went on to project manage Ecotricity’s Electric Highway. Bamberg also oversaw GeniePoint’s growth to more than 400 charging sites prior to its acquisition by French utility giant Engie in 2019.

Bamberg will use his background to fast-track the charging network’s growth as it expands to more than 2,000 rapid chargers by 2024. This includes supporting the company to secure new relationships with key landowners and businesses, enabling the network’s rapid rollout of charge points at convenient locations throughout the UK.

Commenting on his new role, Bamberg said: “We are at a critical junction in the UK’s EV transition as businesses, councils and landowners are increasingly deploying charging facilities to support the thousands of new electric vehicle owners surging onto the UK road network.

“Having been at the forefront of deploying the UK’s first national charging networks – Electric Highway and GeniePoint, I look forward to bringing my industry experience to Osprey to fast-track the rollout of EV charging across the country and to build on their already impressive portfolio of partners in the retail, hospitality and local authority sectors.”

Ian Johnston, CEO of Osprey Charging, added: “With the UK moving towards mass EV adoption ahead of the 2030 ban on new petrol and diesel vehicles, the race is now on for charging networks to deploy public charging infrastructure. Alex’s impressive experience and longstanding commitment to the growth of the EV market will help us expand, and maintain our focus on providing drivers with a reliable, high-quality charging experience.

Previous: Switched on or switched off?
Next: Mer and Allstar clinch roaming deal